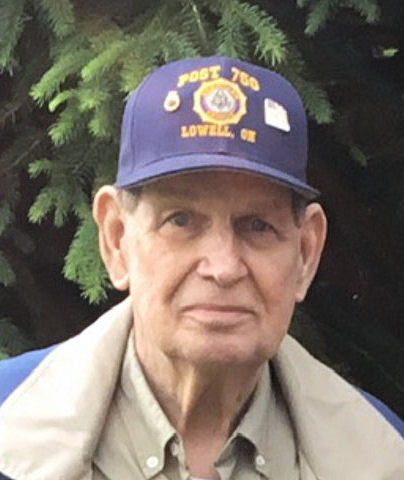 Donald Eugene Berry, 85, of Oak Grove, boarded his train into the gates of Heaven on December 4, 2021, with his loving family by his side.

Donald was born on June 1, 1936, to the late Dewey George Berry and Ethel Marie Woods Berry.

After high school, he enlisted in the U.S. Army until an honorary medical discharge in July of 1956. After his return to Marietta, he married his high school sweetheart, Sandra Lou Hinton, on June 1, 1957. He worked as an x-ray technician at Dravo before beginning his career with Ohio Bell/Ameritech as a blueprint engineer until his retirement in December of 1995. He enjoyed playing his guitar and singing, and his special hobby was playing with his HO trains because “you are never too old to play with trains”.

In addition to his parents, Donald was preceded in death by his brother, Charles Robert “Bob” Berry, and his sister, Lila Irene Berry Sturm.
He is survived by his spouse of 64 years, Sandra Lou Hinton Berry, and their five children: Tammie Lyles (Michael) of Columbiana, Alabama; Diana Antill (Gerald), of Marietta; Jeanette Totman (Mark), of Guion, Arkansas; John Berry (Bonnie) of Marietta; and Tricia Campbell (Daniel), of Marietta. Twelve grandchildren: Nicole Boston Sullivan (Colin); Brooke Boston Martin (Charlie); Michael Antill (Kari), Calvin Antill (Brittany) and Christopher Antill; Ashley Totman Brown (Noah Archote), Allyson Totman Kraynak (Kevin) and Jeremiah Totman; Andrew Berry and Samantha Berry; Joshua Campbell and Jordyn Campbell. Also surviving are 14 great-grandchildren and 2 great great grandchildren, so many bonus grandchildren, and numerous nieces and nephews.
Services will be held on Tuesday (Dec.7) at 11:00 am at McClure-Schafer Funeral Home with Pastor Brian Donze officiating. A full military service will be presented by the American Legion Post 750 Lowell. Burial will take place at Tunnel Cemetery. Visitation will begin at 2 pm Monday with the family present from 2-4 and 6-8. Messages of sympathy may be sent at www.Lankford.com.

Mr. Berry’s children have requested that if you attend the service, wear blue in honor and memory of our father – one because his favorite color was blue and to support colon cancer awareness.

In lieu flowers, the family would request that memorial gifts be made to The Strecker Cancer Patient Care Fund. The family would like to greatly extend their thanks to the Strecker Cancer Center nurses and volunteers, Amedysis Home Health and Hospice, Dr. Siva, Dr. Brockett and Dr. Carman and the Oak Grove EMS staff for all of their loving and compassionate care.